Diabetes mellitus (DM) is the most common endocrine disorder of humans. There are over one million newly-diagnosed patients each year in the U.S. alone. Type 1 DM is a disorder caused by the destruction of insulin-producing endocrine cells within the pancreas; it is currently considered to be the result of an autoimmune process, and long-term complications invariably occur in most patients. Type 2 DM is a disorder resulting from varied degrees of insulin resistance, which is often associated with impaired insulin secretion. More than 90% of diabetics are categorized as having Type 2 DM. The incidence of Type 2 DM increases with age and the vast majority of Type 2 diabetic patients are overweight.

Sinclair Bio Resources additionally offers a variation of induced model of Type 2 DM with dyslipidemia in miniature swine. The dyslipidemia observed is very similar to that of diabetic humans and early atherosclerosis lesions similar to those developed in diabetic humans have also been detected. The similarities of the lipid metabolism, vascular anatomy, and capacity and collateral circulation of the coronary arteries of swine to humans make this Type 2 DM animal model even more attractive.

Miniature and domestic swine are also very involved in investigations aiming at permanently curing Type 1 DM using whole pancreas or islet cell allograph and xenograph transplantation. Xenotransplantation may represent a solution to human organ shortage, and pig pancreas may be a suitable source due to the similarities between human and porcine insulin

Need information or a quote? Get in touch!

Contact us today and learn how Sinclair Bio Resources can provide you with the quality miniature swine and animal models you need, and the support and service you deserve! 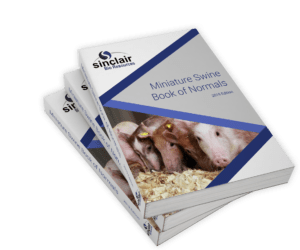 Your Comprehensive Resources of Normal Data on Miniature Swine.